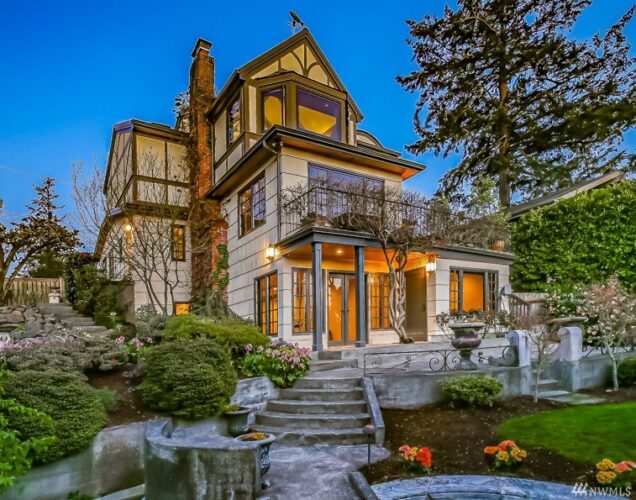 The Real Estate market in the Seattle is crazy!

Brokers with Northwest Multiple Listing Service added 10,562 new listings to inventory during March — the highest volume since September when they added 11,210 properties to the selection. Even so, demand continued to outstrip supply, keeping inventory depleted and we are seeing offers of 5, 10 and even 20% over listed price.

The latest statistical summary from Northwest MLS shows double-digit price hikes were widespread across the 26 counties included in the report for the month of March. Brokers logged 10,863 pending sales last month. That volume of mutually accepted offers marked a 22.3% increase from a year ago and a 40.6% surge compared to February.

From the NWMLS:
“There’s no April fooling when it comes to how hot the housing market is right now,” commented J. Lennox Scott, chairman and CEO of John L Scott Real Estate. “In King, Snohomish, Pierce and Kitsap counties, the current spring market we’re seeing is one of the best on record.”

James Young, director of the Washington Center for Real Estate Research at the University of Washington, agreed, noting March marked the first post-COVID/pre-COVID comparison. “It is very difficult to compare year-on-year results once lockdown started in late March 2020,” he stated.

“The drop in the number of active listings between now and last year is extraordinary,” Young exclaimed. NWMLS statistics show a 55.9% decline in total active listings, shrinking from 9,418 at the end of March 2020 to 4,153 at month end. Young noted the decrease is even more pronounced in “peripheral counties.” Six counties (Clallam, Clark, Island, Kittitas, Mason, and San Juan) experienced year-over-year declines of 69% or higher, according to the latest report from Northwest MLS.

“This collapsing active listing volume in the face of high demand is telling. As this was occurring, the number of pending transactions year-over-year increased markedly. Double digit price increases throughout the region are the natural result,” said Young.

Last month’s median price on closed sales of single family homes and condos (combined) was up 7% from February’s figure of $512,000.

Excluding condos, the median price on single family homes rose nearly 21% from a year ago, from $470,000 to $567,250. Compared to the previous month (February), prices were up 10% OR more in seven counties (Cowlitz, Douglas, Jefferson, Ferry, Island, King, and Pacific).

In King County, the median prices for single family homes that sold last month in the Queen Anne/Magnolia area and every MLS map area on the Eastside topped $1 million.

“Scott noted the local market is “nearly sold out all the way up into luxury price ranges,” adding it is not due to a lack of new listings, but because of high buyer demand. “We’re seeing more luxury listings, which means there are more buyers entering into the market in these price ranges. This translates into very strong intensity into these luxury price ranges.”

John Deely, a member of the NWMLS board of directors and vice president of operations at Coldwell Banker Bain, described the numbers as “truly astounding related to price appreciation and inventory on hand.” As an example, he pointed to Snohomish County, where there is only about one week of inventory and where median prices for single family homes are up nearly 22%.
Condominium prices rose 5.2% year-over-year on closed sales that increased 16% (from 1,015 closings a year ago to last month’s total of 1,179). The volume of new listings (1,528) was similar to the year-ago total (1,455), while the number of active listings (total inventory) dropped 23% YOY. Pending sales of condos surged nearly 43% from a year ago (from 1,101 to 1,574).

“While the data suggest housing sales overall may be slowing, that is related directly to a lack of inventory,” Deely emphasized.

“If no new inventory came on the market, we are at 2.19 weeks of inventory, leading to bidding wars, escalating prices, and severe buyer fatigue,” Hansen remarked.

This is from our Chief Economist at Windermere:
“There was a significant increase in new listings between February and March, but despite this, total active inventory was lower. This is a clear indication that the market remains very bullish, and homes are selling lightning fast across all price points, even in the luxury market.”

“I think a lot of the urgency from buyers is due to rising mortgage rates and the fear that rates are very unlikely to drop again as we move through the year, which is a safe assumption to make,” added Gardner.

Despite exhibiting a sense of urgency, buyers are doing due diligence to win the sale, reported Dean Rebhuhn, owner at Village Homes and Properties. “They are doing pre-inspections, including strong pre- approval for financing and deciding what price works for them. Many purchasers are considering the list price as the opening bid and making price decisions that work to their advantage,” he explained.

Escalating prices are found throughout the Northwest MLS service area.

“Most of the rapid price increases follow the familiar trend of late where the I-5 and I-90 corridors outside of King County are showing exceptional levels of house price growth,” observed Young. “Median house price growth in Skagit County (27.3%), Kittitas County (43.8%), Thurston County (21.2%) and Whatcom County (20.8%) all outperformed King County at 14.7%,” he noted.