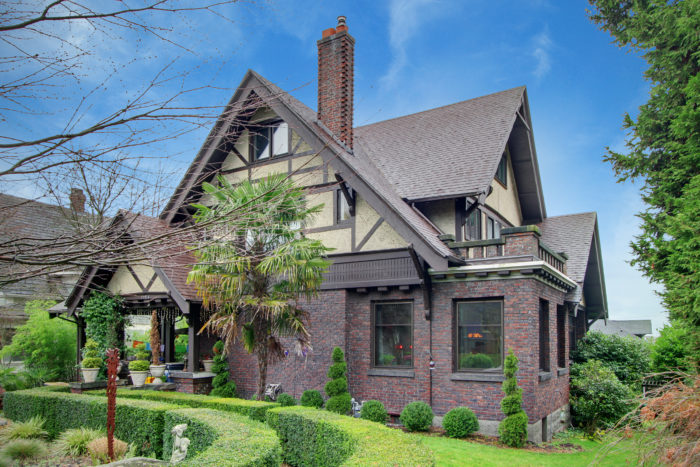 This imposing and proper home has over 5000sqft and is sited prominently on a corner lot at the highest point of Capitol Hill. It has 9 bedrooms and 5 bathrooms, with gleaming hardwood floors on the main and second level and refinished fir floors on the 3rd level. The lower level features slate floors throughout. You will be amazed at the original finishes and quality of construction of this 100+ year old home.  Vintage in design with upgraded systems. 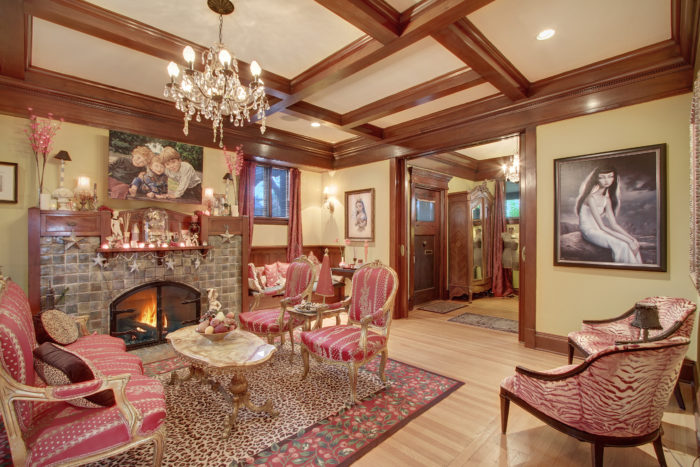 Beautiful details are the hallmark of this imposing 1914 home.  Original Batchelder tile wood-burning fireplace and cozy built-in window seat by the fire.

Because of the age of this home, you will notice many original details and character throughout. 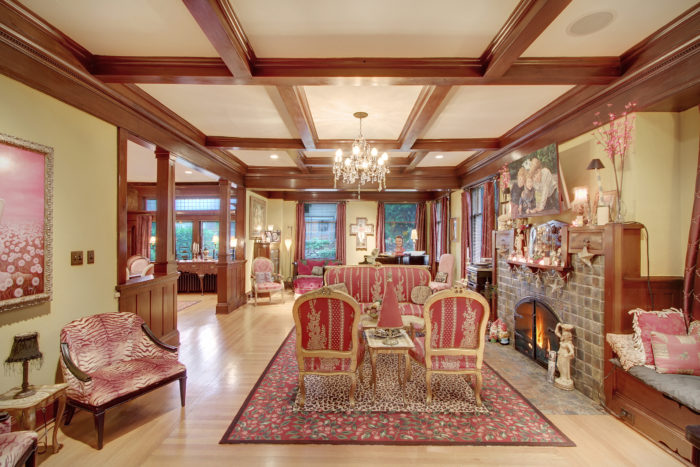 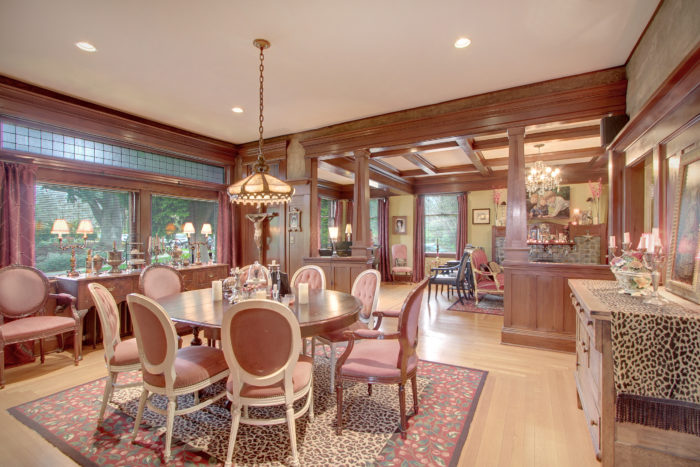 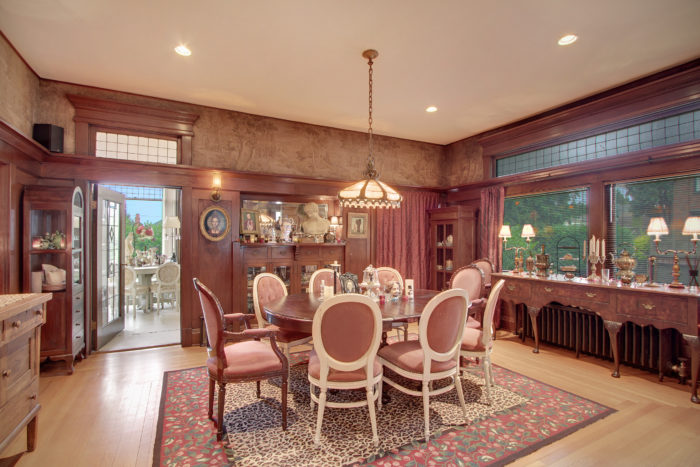 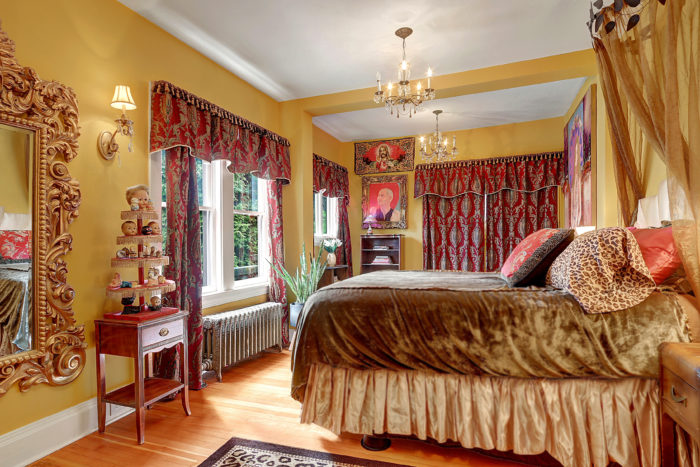 The home features 9 bedrooms, 5 bathrooms, 3 food prep areas and all major systems have been updated, improved or replaced. 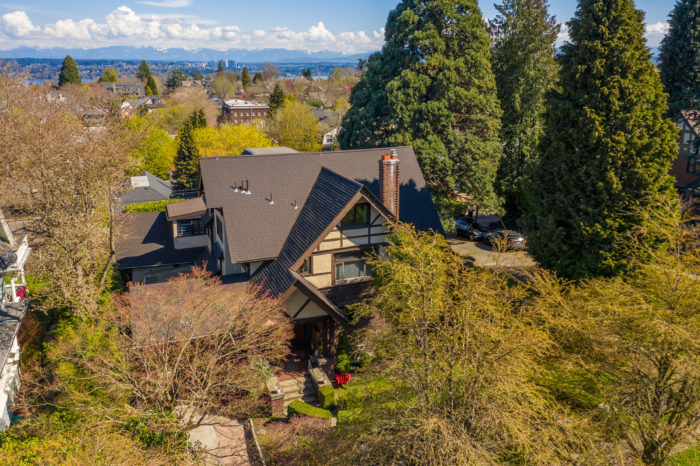 Views East towards Lake Washington and the Cascade Mountains 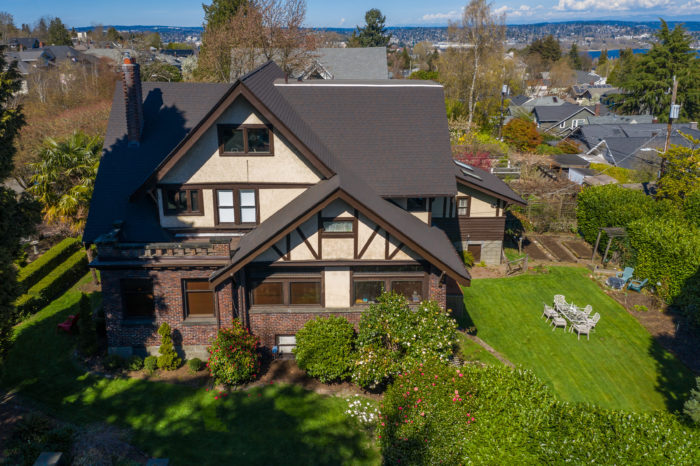 View from the North showing Lake Washington towards Mount Baker. You can view the large backyard from this view. 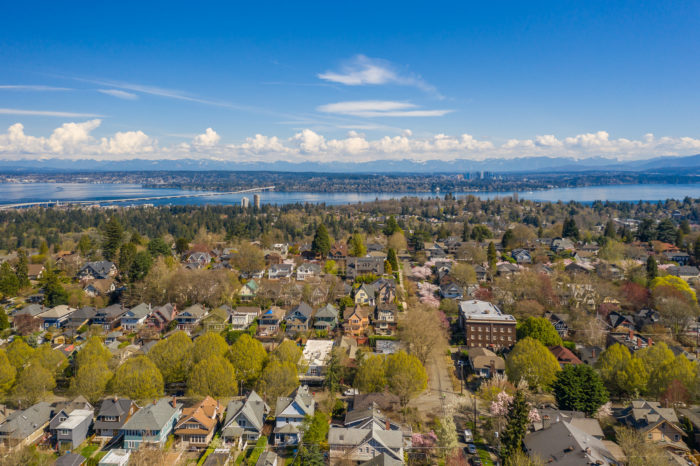 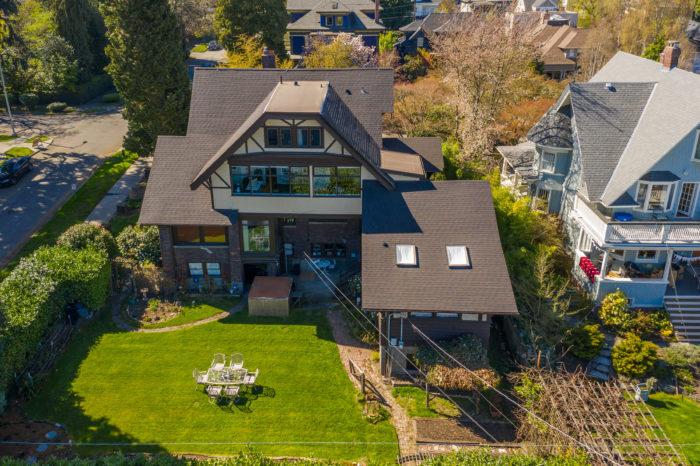 Lovely yard and organic gardens can feed a large family or just water the flowers and enjoy! 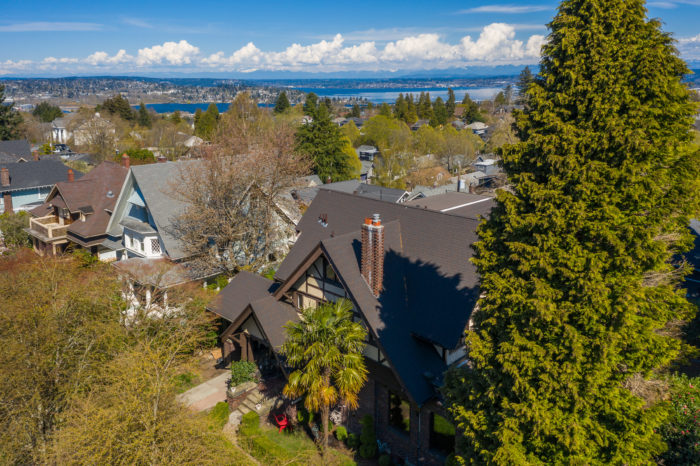 Views over Portage Bay towards Laurelhurst with Kirkland in the distance 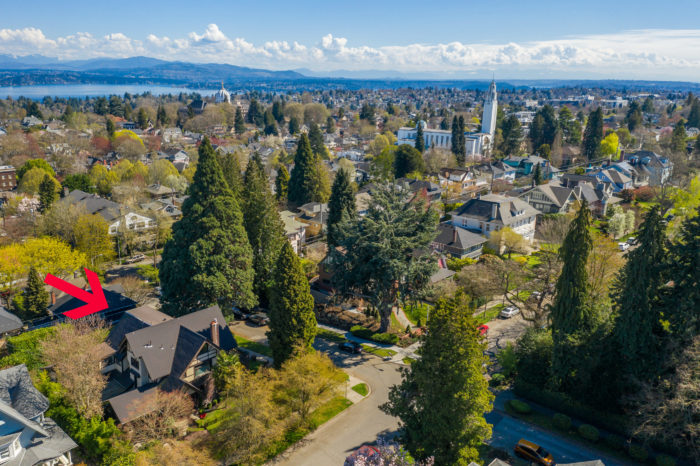 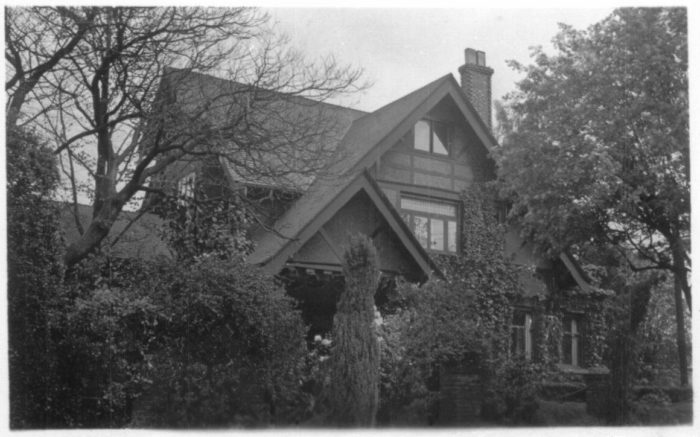 This historic home was built as a single family home in 1914 but then purchased by the Presbyterians in 1952 and converted to offices, a chapel and housing for the minister and his family.

From the book The Presbytery of Seattle 1858-2005 “The Dream of a Presbyterian Colony in the West” by Robert L. Walsh M.D.:

“An open house was held on February 22, 1953 for the new Presbytery House. The three-story house on Capitol Hill at 1104 17th Ave. E. housed both the Seattle Presbytery and the Synod of Washington offices. The home was purchased in July 1952 for $18,000 and it was remodeled for a total cost of $34,000. The house was also used as the residence for the Presbytery Executive, Rev. George McCleave and his family until about 1957. A chapel at the house was named the “McConkey Chapel”, honoring the Rev. Paul McConkey who retired as pastor of SFPC the following year.”

When the current owners bought the house in 2004, they found a number of old notebooks from the 1800’s hidden in a built-in drawer.  They realized they were old meeting minutes and notes from the Presbyterian ministry.  They contacted the local head offices and were put in touch with Dr. Robert L. Walsh, a Presbyterian historian.  He immediately visited the home to take possession of these lost meeting minutes and notes. 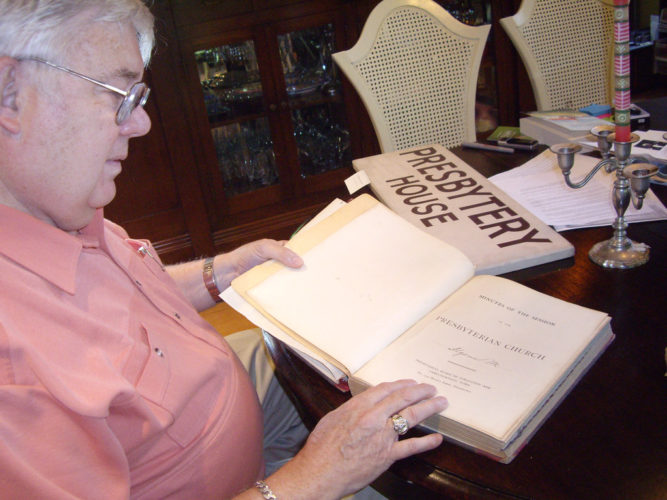 He thanked the owners of the house for finding and saving the notebooks and promised the tomes would find a new home in the library of the Presbyterian ministry. 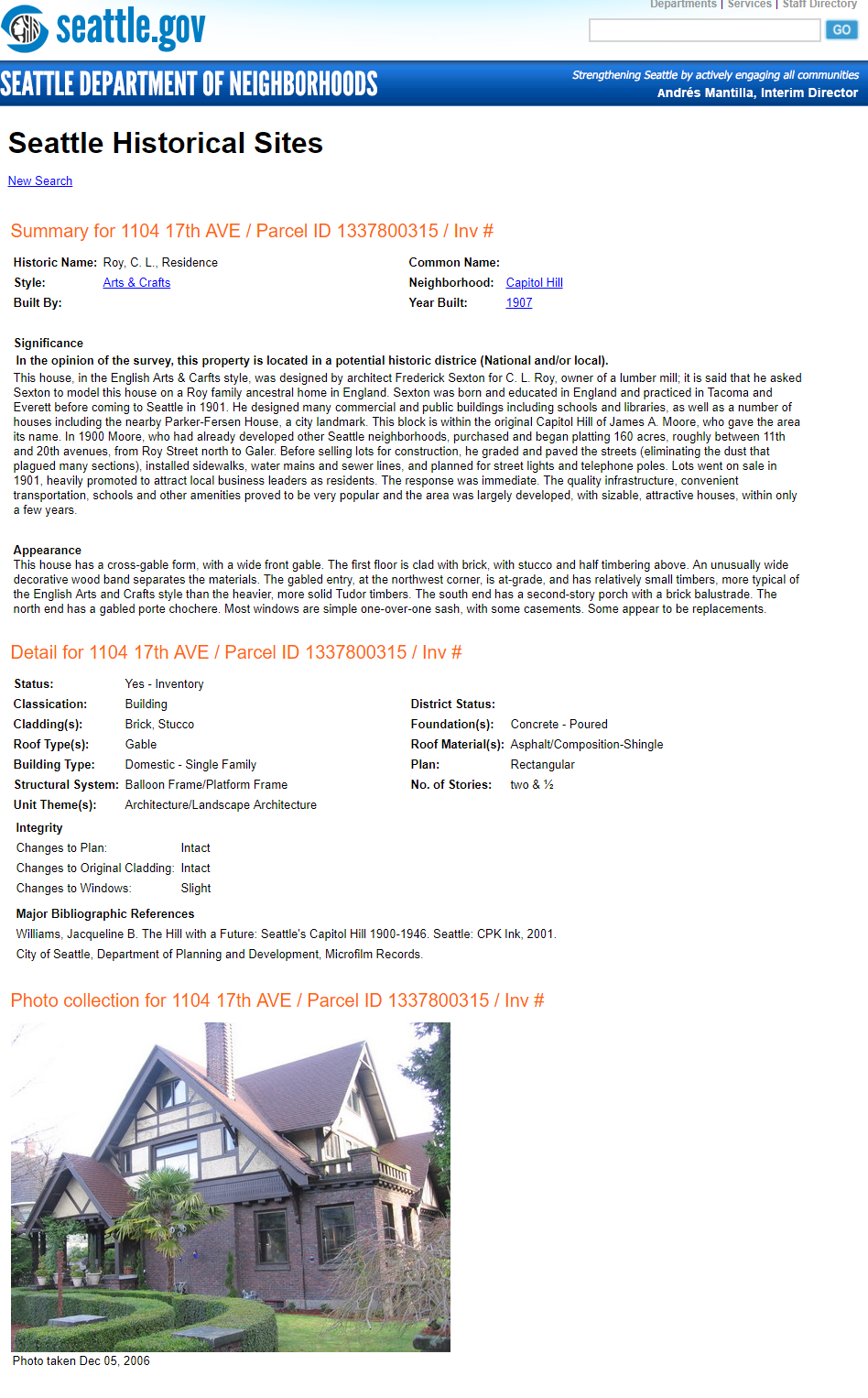 In 2000, the City of Seattle began a systematic and comprehensive effort to survey and inventory historic resources in the City. In the opinion of the survey, this property is located in a potential historic district and is architecturally significant.

This house, in the English Arts & Crafts style, was designed by architect Frederick Sexton for C. L. Roy, owner of a lumber mill; it is said that he asked Sexton to model this house on a Roy family ancestral home in England. Sexton was born and educated in England and practiced in Tacoma and Everett before coming to Seattle in 1901. He designed many commercial and public buildings including schools and libraries, as well as a number of houses including the nearby Parker-Fersen House, a city landmark.

This block is within the original Capitol Hill of James A. Moore, who gave the area its name. In 1900 Moore, who had already developed other Seattle neighborhoods, purchased and began platting 160 acres, roughly between 11th and 20th avenues, from Roy Street north to Galer. Before selling lots for construction, he graded and paved the streets (eliminating the dust that plagued many sections), installed sidewalks, water mains and sewer lines, and planned for street lights and telephone poles. Lots went on sale in 1901, heavily promoted to attract local business leaders as residents. The response was immediate. The quality infrastructure, convenient transportation, schools and other amenities proved to be very popular and the area was largely developed, with sizable, attractive houses, within only a few years. 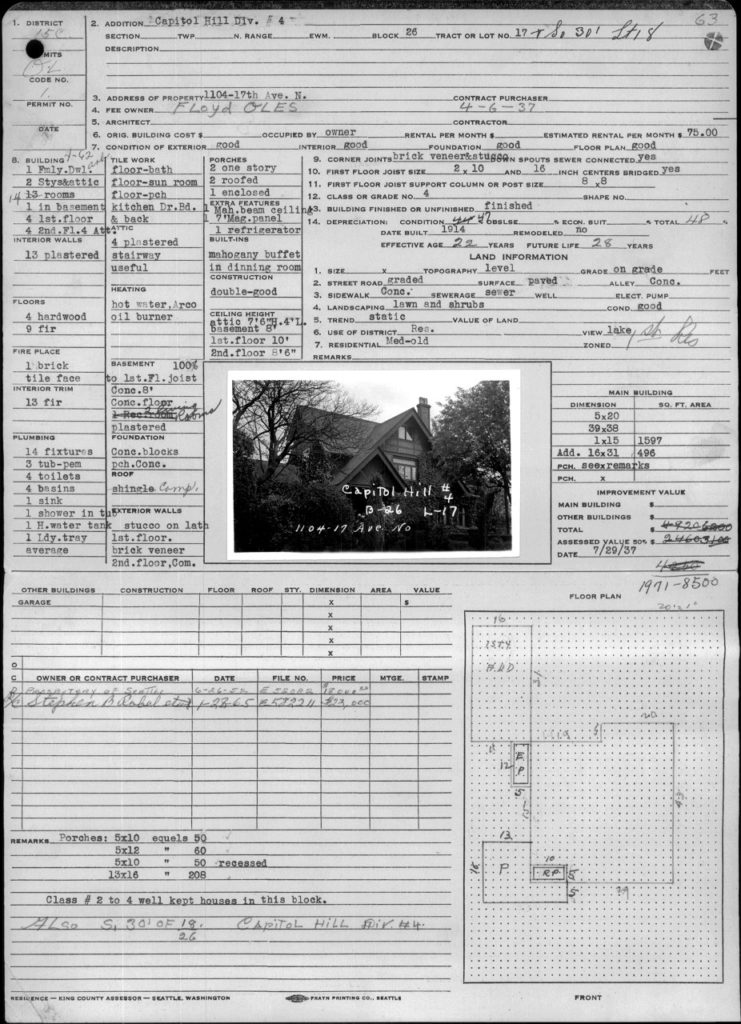 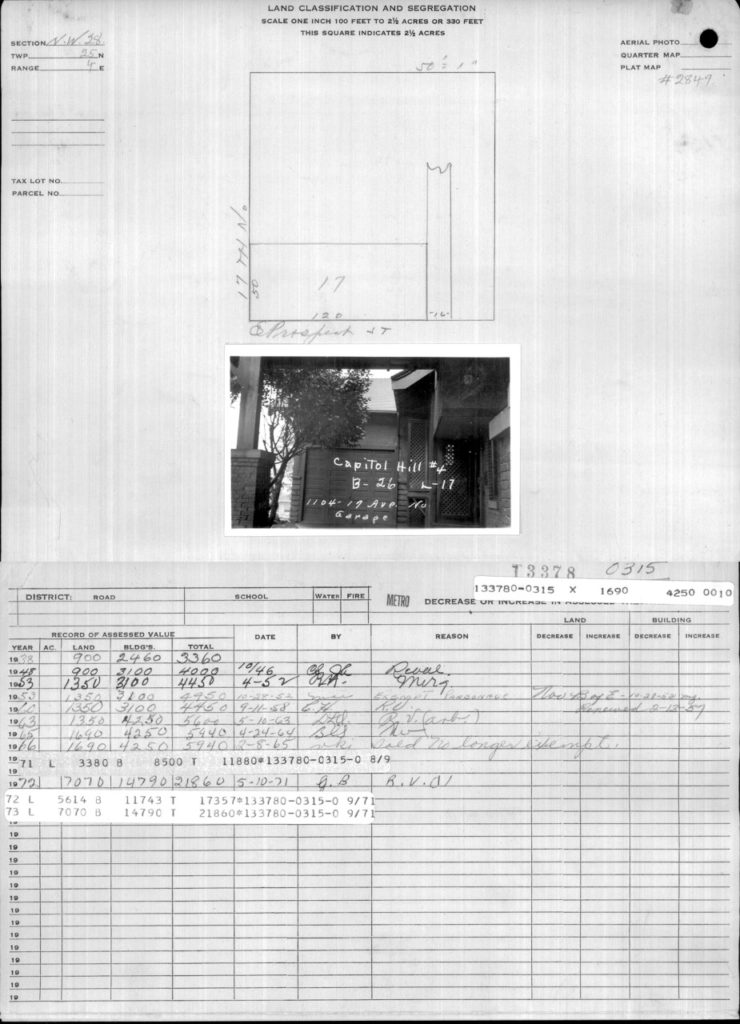 This vintage home is located in a prominent neighborhood, within walking distance to beautiful parks, good schools, fun shops and exciting restaurants and coffee shops. 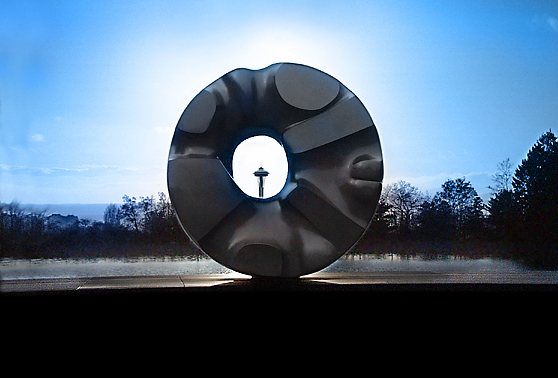 “Black Hole Sun” a granite sculpture created by Isamu Noguchi in 1969 is a favorite at nearby Volunteer Park and the namesake of the song by Soundgarden. 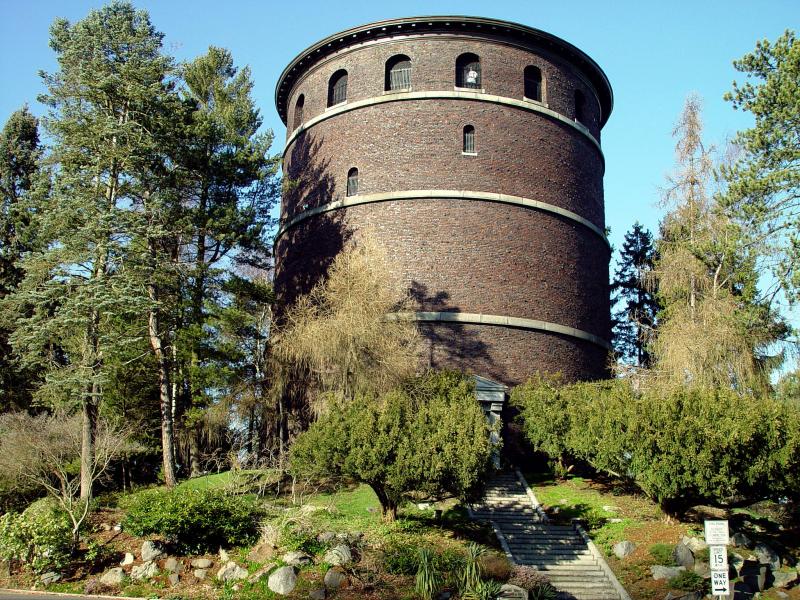 A fun thing to do and great exercise is to visit and climb the Volunteer Park Water Tower. Built in 1906, is located in the southeast corner of Volunteer Park. It’s pretty hard to miss and you will love it, as I do. The tower stands more than 75-feet tall, and since it sits on top of Capitol Hill, the Volunteer Park Water Tower actually reaches an overall elevation of 520-feet, making it the highest point on Capitol Hill.  If you want a good work-out, walk to the top! 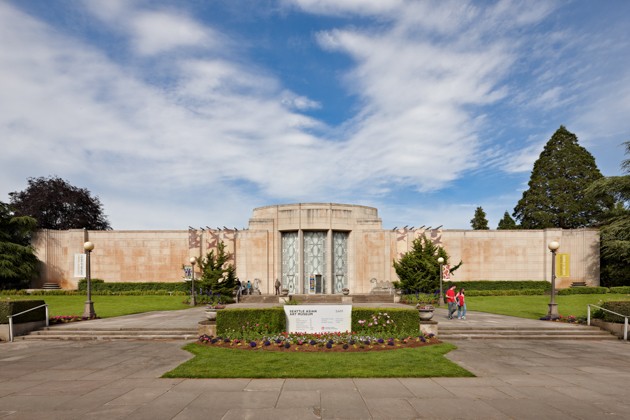 The Seattle Art Museum if also within walking distance and is a museum of Asian art located inside Volunteer Park in the Capitol Hill neighborhood of Seattle, Washington, United States. Part of the Seattle Art Museum, and the SAAM occupies the 1933 Art Deco building which was originally home to the Seattle Art Museum’s main collection.  Visitors to this Capitol Hill neighborhood will also enjoy all of the amenities.  My favorite thing to do is to walk up to Volunteer Park, through the trails and get some exercise.  I also like to walk the trails of Interlaken Park and I have walked to the Washington Park Arboretum too, to see the beautiful flowers in bloom.